Popular author heads to the Greek islands for her latest book.

WHEN a Russian oligarch is blown up on a luxury yacht in the sea off the idyllic Greek island of Paxos, journalists Erik Jordan and Celia Grey are sent to investigate.

It’s not a quick bit of click bait they’re after, it’s the truth, and if it means putting themselves in danger, that’s all just part of the job.

In their pursuit of the truth, old Etonian and office Lothario Erik, and bi-sexual Lancastrian, Celia are taken back and forth from London and Greece, and along the way they fall into more than a working relationship.

The two become entangled in the murky, risky world of Balkan and Middle Eastern politics and espionage and in the end its a question of ‘publish and possibly die’.

Absurd Petunias is the latest book by Amanda Taylor, who lives on the edge of the Bolton Abbey estate. Amanda, whose late father was deputy editor of the Yorkshire Evening News, opens the book with a quote from Anna Politkovskaya, a Russian who died fighting for the freedom of the press.

It is her first venture into contemporary fiction, her last books have all been historical, including The Falcon with a Virgin’s Face which was centered on events around Skipton in the Middle Ages.

Absurd Petunias is available from The Stripey Badger, Grassington, and The Grove Bookshop, Ilkley. It is also available on line from WH Smith and Amazon UK.

THE FALCON WITH A VIRGIN' FACE

Set in medieval England, The Falcon with a Virgin's Face is based on a true rags-to-riches love story played out against a tense and colourful backdrop of civil war.

THE latest novel by an author who lives on the edge of the Bolton Abbey Estate, which is centered on events around Skipton in the Middle Ages, has earned the seal of success from readers. Amanda Taylor’s ‘The Falcon with a Virgin’s Face’ was published in September last year and has now sold more than 1,000 copies in paperback and on ‘e-book.’

The novel is set in the 15th century during the Wars of the Roses and tells the true story of young Henry, Lord Clifford, of Skipton, who as a seven-year-old found himself in a family on the ‘wrong’ side in the War of the Roses, had to flee for his life, and was forced into exile as a shepherd on the Cumbrian fells for 24 years.

And the book has been supported by the Duke of Devonshire, a distant descendant of Henry Clifford, who said: “I read this book in just two days; it is impossible to put down, especially for someone so familiar with the places central to the story - Barden Tower, Bolton Priory and Skipton Castle.” Amanda said: “I am obviously thrilled the book has done so well so quickly. I did the research for it quite a while ago. I am now working on a murder mystery and a spy novel.”

Amanda has also tasted success with five previous novels, all of which are available online and at bookshops.

Wharfedale Observer and The Ilkley Gazette

I would like to thank the Ilkley Gazette for their review too under the title: Falcon gets off to a flyer.

I was lucky enough to receive a copy of this novel prior to its official publication. The Falcon with a Virgins Face brings new life to the past, focusing on everyday lives and the impact of this very unsettled period of history. It’s not just factually interesting it is also a very good read.

Get a real taste of life at that time.Imagine the difficulty of families.This brilliant book exposes the gap in society which, sadly, still exists.

I am sure that this book will stand alongside the well known authors of this period as an outstanding tour de force.

Although perhaps more about the author than the book, nevertheless an excellent article as always by Jenny Needham, Features Editor Northern Echo, titled Crime Writing in the Blood for Dales Murder Mystery Author.

A big thank you to Graham Chalmers and both the Harrogate Advertiser and Yorkshire Post for their coverage in print and online.

The latest novel by an award-nominated Dales author hopes not only to entertain but solve a real-life murder mystery from the 18th century, writes Graham Chalmers, Weekend Editor of the Harrogate Advertiser.

No-one better than Amanda Taylor at delving into Yorkshire's social history and, time after time, coming up with a shocking murder mystery. She not only gives us insights into past life in York, Staithes and, in this latest tale, Knaresborough, but weaves a fascinating account of unexplained mysteries of yesteryear. These crime stories often are featured in local museums but with Amanda's pen are brought to life in a compelling read. 'Aram' is another hit for Yorkshire and Amanda Taylor.

A truly exceptionally well researched true story written in such a style that I couldn't wait to turn each page. It's my first Amanda Taylor read and I am now on the look out for my next purchase from this superb author. I cannot recommend Amanda Taylor high enough.

A great read! I was born in Knaresborough where I still live and could relate to all the places mentioned not only that but I have learnt so much more about its history .
This is the first book that I have read by this author. I am now looking forward to reading her previous ones!

Bought for my mum as a present - cannot wait for my copy. The whole family are big fans of this author. Her research is meticulous & her descriptive style brings her books to life. Cannot put the books down - many an unscheduled late night reading!

THE VIGIL OF RAIN

An Edwardian murder mystery set in the Yorkshire Wolds, The Vigil of Rain is the final part of Taylor's James Cairn trilogy.

While debut Dangerous Waves saw Cairn, the York barrister, in a murder mystery in Staithes in the year of Queen Victoria's Diamond Jubilee and follow-up Mortimer Blakely is Missing saw him involved in a political crime drama set in late 19th century, The Vigil of Rain opens with Cairn being invited to a grand house party in a traditional Edwardian whodunnit.

Having received praise for her previous books by the likes of Kay Mellor and Gervase Phinn, fans of Taylor's are licking their lips in anticipation.

Published by Jeremy Mills via Northern Heritage Publications,The Vigil of Rain is available now in paperback and on ebook.'

'Mortimer Blakely is Missing is a wonderful read.  It is compelling story: gripping, original, accomplished and challenging.'

'There's a haunted air to the impressive dust jacket of Amanda Taylor's new historical crime novel.  That ghostly hooded apparition without a face superimposed upon a stormy sky and a menacing sea.  It says danger and intrigue and mystery.'

Mortimer Blakely is Missing has hit the high road and was Scotland's Press and Journal book of the week on the 5 July, 2014.

(A new and perfected version of The Chinaman's Bastard)

'Dangerous Waves is both clever and moving; a tremendous mystery with twists and turns that will keep you gripped until the final page. I couldn't put it down.'

The Northern Echo is the first newspaper to coin the heading that Dangerous Waves is MAKING WAVES.

Dangerous Waves was originally published under the title The Chinaman’s Bastard in August 2009 but has been revisited by the author, substantially revised, re-edited and republished. It is a great read by an excellent crime writer, and it has certainly been well-researched; both the court drama and the descriptions of Yorkshire bring the novel alive. A real sense of time and place is created; Staithes in 1897 is a great backdrop to the story. The characters are well developed; from the naïve, childlike Daniel to the professional barrister James Cairn, individual personalities come through.

It has a great pace, and the reader is placed headlong into the story from the first page. The language is suitable for the era, and it reads easily with well-written, concise dialogue and vivid descriptions. The chapters are not too long and help build up the tension. The plot keeps the reader guessing, starting with a dead body washed up on the rocks, and the twists and turns add drama, making it engaging and compelling.

This is a good read for historical and crime fans. It is set in an area I know well, but if I didn’t I would love to visit. I look forward to the next book in the series, Mortimer Blakely Is Missing.

Dangerous Waves was featured in The Big Issue in the North, 30 June—6 July, 2014, in a Q & A article between Amanda Taylor and journalist, Ciara Leeming.

'This is a truly excellent book and as a first novel it heralds the arrival of a major new crime writer. The background historical and scientific research which went into the writing of this book lifts it above the normal crime novel. As someone familiar with High Court cases, the trial at the end is not only gripping, but entirely true to life. I cannot recommend this novel too highly.'

'Harrogate author Amanda Taylor paints a gripping detailed picture of the hard life of Yorkshire fisher folk and police and legal procedure at the end of Victoria's reign.  The climax is a Crown Court murder trial that smacks of Hitchcock at his best and is as arresting as the title of this wonderful page-turner.'

'Set on the Yorkshire coast and in a York courtroom, this novel is replete with details of late 19th-century English coastal and city life.' 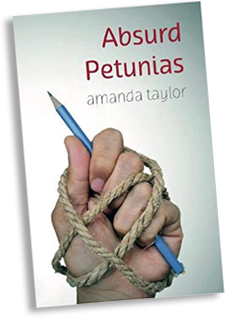 Popular author heads to the Greek islands for her latest book.

'You once told me peregrines mate for life.’

'Villany is always progressive, and declines from right, step after step.'
Eugene Aram, 1759

'As things were to turn out it would be a weekend I would never forget, none of us would.'

'Tomorrow would be a day of reckoning.  Tomorrow I was determined to find Mortimer Blakely.'

'Too late – the big wave came, the wave they had all dreaded might come.’